Which dog is the right dog for you & where to buy a dog for sale?

Jack Russell Terriers are working dogs whose original function is hunting. Today the dog continues to be used in hunting sessions, as a vermin dog, and takes part in many canine sports, such as agility and obedience. However, the Jack Russell is now a popular pet dog, which causes great concern on the part of many breed fanciers.

The breed originated in England in the 19th century. Its name stems from its father, the Reverend (Parson) John Russell. This foxhunting lover regarded a Fox Terrier bitch named Trump one of the best hunting dogs. Trump was all white except some markings on the head. It allowed hunters to distinguish between the dog and the game in the field. Parson Russell created a new breed that received wide distribution in Europe.
In 1992, the UKC registered the breed. It was the turning point in the development of the Jack Russell Terrier. Most breed clubs did not approve of the registration that threatened the future of the breed. A long-term fight for the preservation of the true Jack Russell Terrier type and its working qualities began.

The AKC accepted the Jack Russell in 1997. This all-breed registry approved the breed standard that is meant to be adhered to by breeders and breed clubs. According to the standard, the Jack Russell should stand about 12-14 inches at the shoulder. A sound dog should have a well-balanced body, strong but showing no excessive muscles. The legs are straight and the feet are cat-like. The tail is usually docked and set high.
As for the coat type, there are three varieties of the Jack Russell Terrier. All of them, smooth-haired, broken, and rough, have under coat and outer coat. Hairs lie closely to the body and protect the breed from water and cold. The Jack Russell should be predominantly white in color. The percentage of white should be no less than 51%. Markings of tan, black and similar hues should be restricted to the head and the tail.
In fact, Jack Russell Terriers do not always conform to the official AKC standard. There can be certain deviations from the standard, such as the height of the dog, or constitution. Thus, the English Jack Russell Terrier Alliance, Inc. promotes the short-legged Jack Russell Terrier. This variety does not exceed the height of 12 inches. However, it does not detract from the breed's merits.

Jack Russell Terriers - Puppies - Is it a Dog for Everyone?

The Jack Russell terrier is definitely not the dog for everyone. The breed is not recommended for novice owners. Like other hunting breeds, the Jack Russell has a strong hunting instinct. Its curiosity can get the dog into troubles. Though the Jack Russell is a very intelligent breed, it is not always easy to train. Many experienced owners and trainers state that the dog can be dominant and will try to have things its own way. Therefore, it takes considerable efforts to train the Jack Russell Terrier. Compatibility with other pets is moderate. The Jack Russell can get along well with cats if raised from an early age. However, most Jack Russell Terriers are often seen chasing cats and other non-canine animals.

Jack Russell Terriers are independent hunting dogs that can take over the entire household, if allowed to do so. These inquisitive creatures need a lot of mental and physical training. Obedience training is highly recommended for Jack Russells from an early age.
Like all the terriers, Jack Russells spend most of the time exploring surroundings. Vermin are looked for in ultimately every corner of the yard. This breed does better on a farm or in a house with a fenced yard. In fact, limited spaces are not a proper place to keep a Jack Russell Terrier puppy. It will thrive only on a lot of experiences and activity.
If you want your Jack Russell Terrier to enjoy the companionship of other household pets or children, it is better to socialize it from the first days of its life. Jack Russell Terrier puppies should be taught to absolutely accept close habitation. Their inborn dominance and striving for ruling the world can lead to undesirable effects, if not directed in due time.

Jack Russell Terriers are very sociable dogs and need a great deal of interaction. Therefore, take your Jack Russell puppy for a jogging session or a hunt. Your dog should be allowed chances to find out more about the world and practice its skills in the field.
When hunting, there are some rules that will help you to protect your Jack Russell from injuries and other health problems. This may include poisoning, getting in a trap, and more. Educate yourself about health care in the field and enjoy field activities to the fullest! Your Jack Russell will give vent to its energies and appreciate this experience. 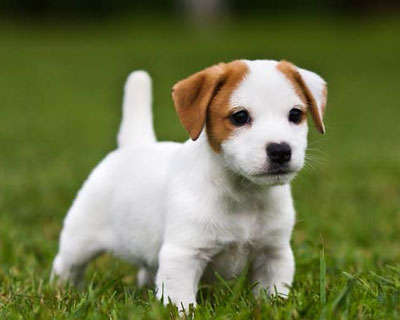 Overall, caring for a Jack Russell Terrier puppy does not cause any problems. The breed requires minimal grooming. It is also easy to look after in terms of feeding. Jack Russells need simple foods. Note that your puppy should always have access to fresh water.

you are not planning to breed you Jack Russell Terrier and have acquired a puppy with a spay/neuter contract, consult your veterinarian on the best time to do it and ask about possible costs. The costs should be reasonable, neither high, nor low. If you are offered low cost surgery, find out more about the procedure to determine if a professional carries it out.
Make sure your Jack Russell Terrier puppy will be operated on with sterilized instruments and reversible gas anesthesia. Other points should also be adhered to in order to make the surgery safer. Keep in mind that spaying/neutering Jack Russell Terriers has its advantage and helps to improve the breed by preventing unplanned breedings.